Open data innovations, however, are only truly beneficial to the public if they can be used to initiate positive social change. The following project is a successful example of how open data is put to use to activate and help empower marginalised urban communities in Brooklyn, New York.

596 Acres is a non-profit organisation existing of a team of design, law and IT professionals who aspire to help empower communities and facilitate sustained local action. By analysing New York City’s open data on empty plots of land, the non-profit discovered 596 acres (241 hectares) of vacant public land in the borough of Brooklyn.

While this data was freely accessible to the public through NYC’s online repository, the non-profit recognised the difficulty for non-experts to navigate the city’s open data platform, or to make sense of its data sets. The organisation therefore developed online tools and visualisations that transformed the city’s data into ‘readable’ information for citizens.

They mapped all publicly owned, vacant pieces of land in Brooklyn and designed a physical intervention too; by putting up posters on the fences surrounding the vacant lots they aimed to raise awareness amongst locals. These ‘call-to-action’ posters contained provocative texts (e.g. ‘This Land Is Your Land’), basic information about the city agency owning the lot, and the agency’s contact information. The posters, along with the digital information provided on the 596 Acres website (with numbers, figures, and maps), triggered neighbourhood inhabitants to take action and gain access to these lots by contacting the non-profit or directly contacting their local council.

The non-profit aspires to transform the city’s information and political landscape by unlocking data on the urban landscape for those that want to get involved and have a voice in shaping their local environment. 596 Acres also acknowledge the importance of making information (i.e. open data) available to the community ‘on the ground’ by using both physical (offline) as well as digital (online) tools for presenting the municipal information.

The next step in 596 Acres’ practice is guiding interested participants in the process of appropriation. They provide education to locals about how to participate in decision-making processes by the city government that affect their neighbourhood; they assist communities with legal support on land use issues; they work with the community after they get access to the land in order to build a durable local governance, and they argue for municipal agencies to allow more community participation concerning public resources.

The 596 Acres example demonstrates that it is possible to build a community-led project from the ground up, create a critical mass to enable change, and prevent ephemerality by establishing a network around a project to sustain its life.

Of the 36 vacant lots 596 Acres have helped transform since October 2016, 30 have been made permanent community spaces by transferring the land to the NYC Parks Department or through leases with public authorities. Volunteer residents and local community partners have transformed lots into spaces where they gather, grow food, and play.

The initiative to transform these vacant lots always lies with neighbourhood residents. While 596 Acres acts as a supporter and advocate for these projects, ultimately, the spaces are managed autonomously by the local community. The team primarily provides legal advice and technical assistance to communities navigating their local council’s bureaucracy. There are even cases where residents took initiative on their own without direct involvement from the non-profit, by simply following the instruction on the offline posters and online information, and getting in touch with their local authorities to gain access to the land.

Finally, the team uses social media to support and grow a larger community around the projects and to maintain a network through which locals can share knowledge and best practices, build relationships with decision-makers, build bridges between neighbourhoods, and establish groups to build sustainable local community governance for the land.

What are the lessons socially-engaged designers and other urban professionals can take away from this example?

596 Acres is an example of a data-driven public realm design intervention that was successful in facilitating long-term citizen engagement, appropriation, and empowerment. This project adopted a bottom-up approach; rather than imposing their agenda on a community, the strategically placed posters encouraged locals to contact the team for collaboration. By understanding the needs of the community in this specific socio-economic context (there is a lot of competition for land in Brooklyn and communities benefit economically from growing their own produce), 596 Acres was able to create a project that was appreciated and appropriated by the local population.

While this project is a successful example of sustained community engagement, it also demonstrates that these kinds of projects can require a long-term commitment and involvement of the initiator to cultivate ownership and help communities appropriate a project. Without a long-term process of counseling and educating to activate and empower the local agents, the project would not have become rooted within the community.

My PhD thesis argues that designers and urban professionals could adopt a similar approach and work in multi-disciplinary teams, such as the 596 Acres example, to ensure long-term engagement by part of the team, while designers are able to exit the project without risking its continuation. This way, designers can focus on the design aspects of the initiative and step out of a project without jeopardising its social sustainability. Other team members, such as law professionals, social workers, or civil servants can stay involved in a project for a more extended period to help create a reliable social network, and, rather than placing designers as central nodes, positioning the right local actors at the centre of the network.

My next article will discuss the problem of placing a design team at the centre of a project’s network, which often results in the discontinuation of a project, and demonstrates how digital data could help prevent this undesired phenomenon.

This article is part of a series of summaries of my PhD dissertation ‘Data for Design’. 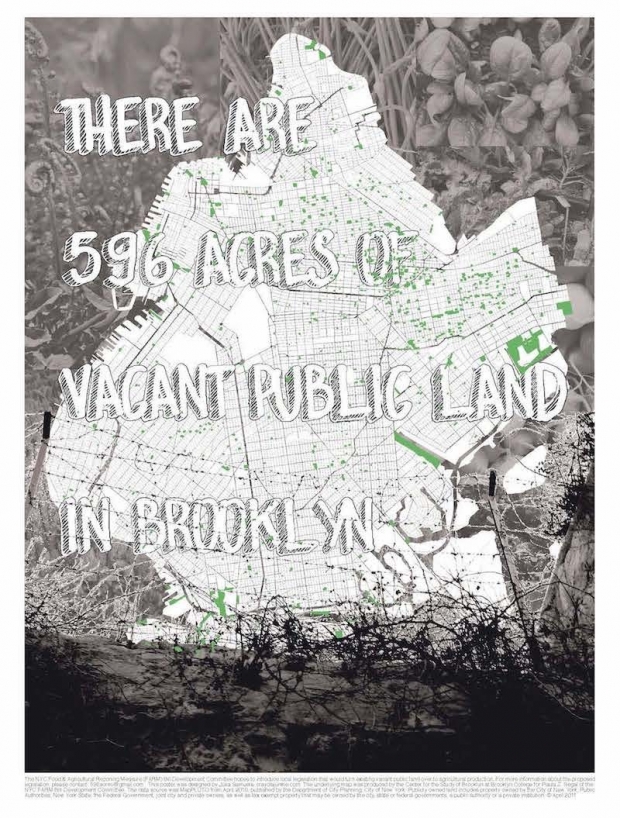