An approach to urban planning and design for user-driven redevelopment in Rotterdam South’s deprived neighbourhoods.

Momentarily seven focus-neighbourhoods, in Rotterdam’s Southern periphery, are subject to a national policy aimed to drastically ameliorate the social, economic and physical living conditions. In this “un-Dutch” situation (Deetman & Mans 2011, p.8) liveability is under pressure because of an aging housing stock, stagnating economic development and a differentiated low-income population. Due to the declining accountability of traditional stakeholders in neighbourhood development and to the current economic climate, the future of a positive development of these neighbourhoods is uncertain. More than ever there is a demand for local parties to take the initiative in the urban regeneration process of these neighbourhoods (Stouten 2010; Qu & Hasselaar 2011; Drewe & Hulsbergen 1998). This means that the challenge is to bring back the creation of urban space under the transformational capabilities of local actors like residents, social organizations and entrepreneurs. Therefore the aim of the paper is to reposition the role of the urban planner and designer within a participatory multi-actor development process for urban regeneration. This in relation to the question: how can urban planning and design provoke user initiative in neighbourhood transformation, making them more social resilient and self-renewable living areas?

To find the answer to this question the first part of the paper will discuss the outcomes of field research in Rotterdam South neighbourhoods. By studying two cases of user initiatives in the regeneration of the living environment a system of self-organization is analysed. Secondly the livingfields method (Veldacademie 2011) is introduced as a means to study the neighbourhood’s potential for user-driven regeneration. This is followed by a theoretical critique on what the outcomes of the field study mean for the way the urban planners and designers should approach urban regeneration. Here conditions for sustainable urban development in relation to participation and the structure of the city are discussed. 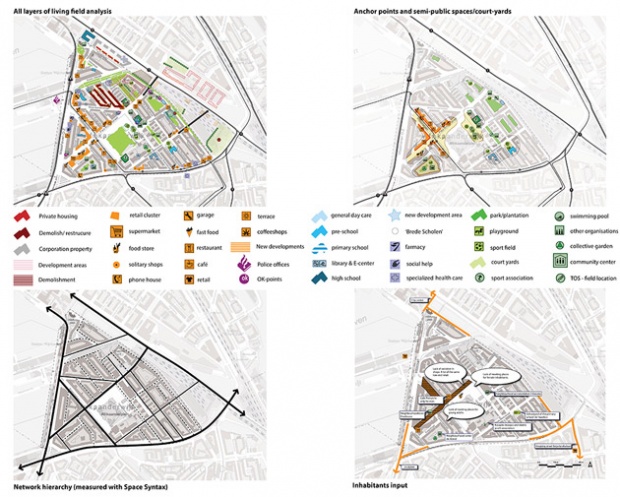