Buenos Aires has the profile of a world city as the capital of Argentina, as the former entrance to the continent of South-America, as the current most important city for the Southern part of the continent and as one of the big metropolises of the whole continent. Due to worldwide economic integration processes and accelerated urban growth related to this, traditional ways of planning and policy strategies for global city-regions are not convenient anymore. The exploration for new types of strategies in the continuously changing conditions of globalising cities makes this case on Buenos Aires highly relevant. Global cities in general face typical problems related to their economic, political, social and spatial situation, although it must be said that these issues interrelate towards each other.

The metropolitan area of Buenos Aires counts a population of approx. 13 million p. distributed among 24 different administrative unities. The globalization processes have taken place in the region and the result is visible by the large socio- economic differences in the populations income as well as the degree of development of the urban environment. To ensure a functional and sustainable environment for the inhabitants, the area needs a strategic plan that will function for all the stakeholders, bring prosperity to the region, but also respect “the right of the city” for the socially disadvantaged people. 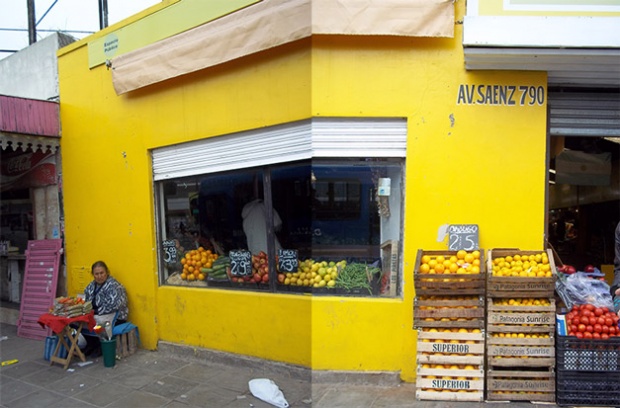 We propose a model for the metropolitan area of Buenos Ares aiming to decrease the spatial polarization and to create conditions for the balanced development of the whole region. From there we go to the neighbourhood of Nueva Pompeya, where we develop a proposal related to the earlier stated metropolitan vision for Buenos Aires.

Centralities
Looking at the shape of Buenos Aires, one can easily recognize the main infrastructural logic of the city; the urban settlements are located next to the highways which stretch out to the surroundings like the fingers of a hand. The areas adjacent to the highways are very well accessible by means of private transportation, while the area in between the fingers suffers from a lack of connectivity and also represent the areas with the lowest social- economical status.

The street network of the city can be divided into three levels. While the above mentioned highways belong to the metropolitan scale, the streets of the next lower level belong to the different areas of the city. The neighbourhood streets are part of the local network and are in many cases not well linked to the upper networks.

In order to improve the accessibility of the disconnected areas and avoid further spatial polarisation, we propose a new ring structure, which will complete the existing infrastructural network. At the current situation the centers can predominantly be found in the Autonomous City of Buenos Aires, the province of Buenos Aires on the other hand lacks sub centers; the monocentric model. With the implementation of the ring structure we aim to stimulate the developing of new centers and the expansion of existing centralities along the emerging infrastructural nodes. Since a distinctive identity is a crucial aspect of a centrality, the newly emerging centers will have different identities which will complement each other – and Pompeya area has the potential to be one of those.

Proposal Pompeya
In order to turn Pompeya into a new centrality, we first need to define the term centrality. Next to a critical mass of people, specific functions and a good accessibility, centralities also need to be part of bigger network. Furthermore they needs to have an impact which goes beyond their own borders. As already mentioned above the distinctiveness and unique identity is crucial for a centrality in order to compete with other centers. When we look at Pompeya it is quite obvious that all important ingredients are actually there, apart from the unique identity. Therefore reshaping the identity of the neighbourhood will be one of the main aspects of our development strategy for Pompeya.

Because of its location, Pompeya has always been the area, where the livestock which was produced in the south entered the city to be brought to slaughterhouses and food manufacturing industries. These industries were the driving force of the industrialization of the south, but suffered from serious decline in the process of deindustrialization. Pompeya’s links to food production are not only a story of the past but could also be used as a tool for future regeneration of the neighborhood. It could be a chance to start a cultural program which involves social and spatial changes.

The implementation of the food circle can be described as the primary intervention, which reacts on local problems and potentials. It is the “underlying foundation of a sustainable community”. On a secondary level, the food circle will stimulate new developments and attract activities which will help to develop Pompeya into a metropolitan centrality and serves the needs of the neighbourhood at the same time. 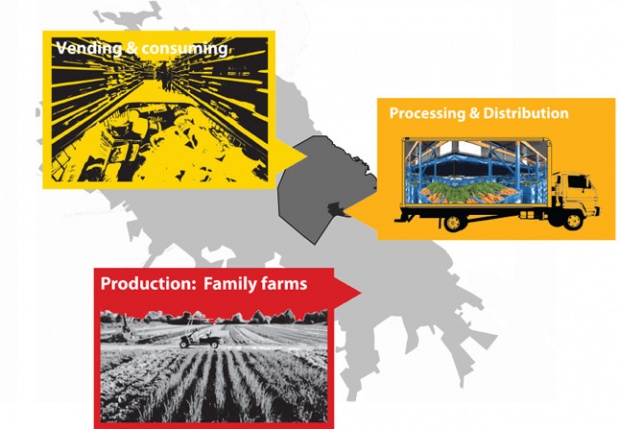 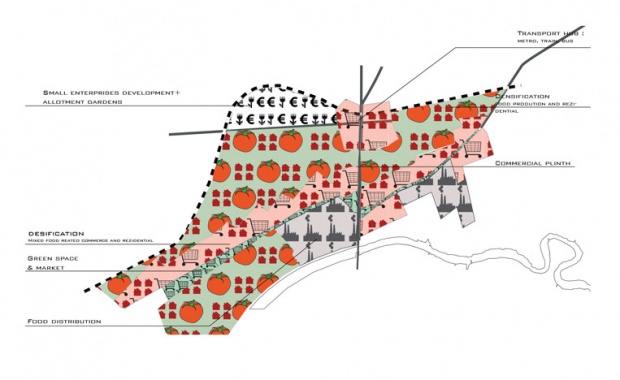 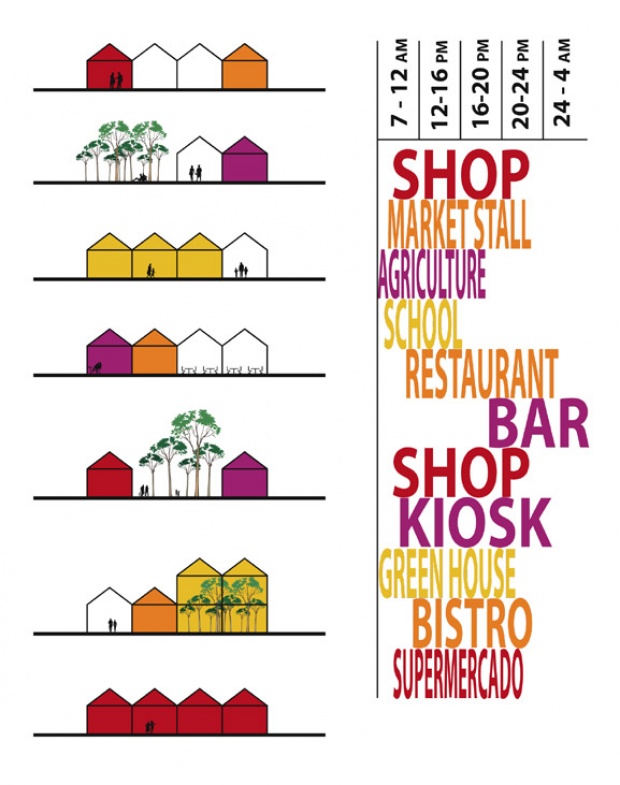